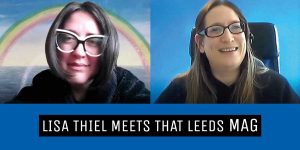 For the December 2021 edition I have spoken to Lisa Thiel we chat about TV quiz shows. In 2014, Lisa’s wealth of knowledge and confidence on screen led to her becoming a well loved Egghead. Plus, she’s of course a local leeds resident.

Here is an abridged version of our conversation from 3rd November 2021. Along with some highlight video clips above.

Deby: How have you managed to accrue so much general knowledge?

Lisa: It’s just an accident, really. It’s a combination of liking to read, just any kind of book, it doesn’t matter whether it’s a philosophical tome or the world’s trashiest novel, there’s usually facts and cultural things that you can pick up in the background of it and those kind of go in and stay in. Reading lots is one factor. Just being genuinely curious about the world, I think you’re either the kind of person that likes to read the news, or you’re not. Either you’re the kind of person who watches a film, and then wants to go and find out about how it was made and who the cast are and what else they’ve done or you’re the kind of person who watches and goes, “Hey, that was alright. Next film”. I happen to be the first kind of person. So, reading, curiosity and then just having that kind of mind where that kind of useless stuff comes in and sticks. I can’t remember what day I’m supposed to send stuff into school for my kids, I can’t remember important phone numbers, I can’t remember when my house insurance is due for renewal. But I can remember who the Prime Minister was in 1956. Professionals will tell you the hard bit is not getting the information into your head, the hard bit is getting it back out again. Therefore, you see a lot of people kicking themselves and going “I knew that”. Because they probably did, they just can’t bring it back to mind at the right time.

Deby: How did you go from being a contestant on the Weakest Link to becoming an Egghead?

Lisa: It was a long trajectory. I did the Weakest Link straight out of university and I was 21, then I did some little bits of TV. I did The Chase, that was about 2012. And then in 2014, after my daughter was born, I ended up going on this new show, which was been made by 12 Yard, who do Eggheads. They were kind of watching me, it was presented by Jeremy Vine and involved CJ who was an Egghead at the time. I did alright on the show, won some money. Afterwards they were being very nice to me, saying “Well, that’s very good, you know, well done”. And I was like, this isn’t normal because I’d done a handful of the TV shows up to that point. And I knew the standard practices – “Alright. Yeah, nice to see you. Next lot of contestants please”. So, I was a bit confused by why they were being so nice about it. The next day, I was in Aldi, doing shopping, and I got a call, the guy on the other end of the phone said, “Hello, I’m the Managing Director of 12 Yard. I was wondering if you could be one of our Eggheads”. “Okay, yeah, I’m at the checkout can I ring you back?” I mean, honestly. He said “Do you want to have a think about it? Because, you know, it’s Friday afternoon”. And I was like, “No, I don’t want to think about it. I want to sign anything you could put in front of me, I want to do it now!” Six weeks later, I was filming my first block of shows. The background to all of that is they’d been looking for a while for a replacement Egghead for Daphne, one of the original Eggheads who decided that she didn’t want to carry on anymore as a member of the team. And they did want a female Egghead, but they were struggling to find any women that they thought would be right for the job. And I just happened to be in the right place at the right time.

Deby: I’ve done a bit of research, obviously, and I’ve watched the episode you did on The Chase. What impressed me is the confidence that you had on camera.

Lisa: The funny thing about being on camera is to me it doesn’t feel that weird. We’ve seen a lot of teams come in, and they’ll be chatting away. And the minute they switch the cameras on, and they know they’re on film, their whole demeanour changes, and you feel awful for them. Because all you want to do when people come on the telly is make sure they’re having a nice time and being themselves. And it just completely freaks them out. And you feel awful, because it’s just a camera, it shouldn’t be getting in the way of the interaction with the person on the other side of it. But, during my first block, way back in 2014, I’d been doing it about four or five days, and the crew started coming up to me and saying, “weird thing about this is you look like you’ve been doing this forever”. And I said, “Yeah, actually the weirdest thing is it don’t feel weird at all. It feels very natural.” Staying cool is important. It’s very, very easy to get flustered. And it’s what a lot of quiz show formats rely on, that moment when contestants are going to lose it. But if you know you can hang on to your nerves, you’re going to be alright. The biggest advantage we have as Eggheads actually, is our familiarity with the environment.

Deby: Do you think that this affects contestant’s ability to recall the information?

Lisa: I think it can make you make some very strange decisions that you wouldn’t normally make. I had a science round, science is not my favourite, against this fella who was a lovely, lovely man, he was very chilled. And they said to him, “What colour is a lemon shark?” Now it’s his first question, as a rule the first question is easy. So, choose from red, yellow, and blue. And he went “Now you’re trying to freak me out here. I’m gonna say blue.” And I thought mate, you would never do that in the pub. Why are you doing that now? I felt awful for him. I really did. We don’t get a lot of loud swearing, but we do get people who sort of chunter a bit when they’ve lost if they feel something was unfair. Some of the mardy behaviour is quite funny.

the hard ones to beat are always married couples

Deby: I suppose it makes it more fun for you when there are some real characters on the show?

Lisa: It’s almost like having people around your house, you want them to feel like they’ve had a good time and you don’t want them to go away feeling angry about it. There have been some memorable celebrity instances of that. There’s one person, who I shall not mention, who got beaten on what we all regard as his specialism, apparently chuntered all the way through the show, all the way out of the studio and all the way back in the taxi to the airport.

Deby: Are you allowed to go on quiz shows?

Lisa: No, there is a provision in our contract that says no, well, technically, we’re not allowed to go on television quiz shows. There was a bit of a stink. I think maybe a year or two before I joined, where Barry, fellow Egghead and fellow Leeds resident went on Brain of Britain, which is obviously a Radio Quiz Show and everyone was saying, “Why is he allowed, was this alright?” He won, which was probably the other thing that was sticking a little bit in people’s minds, but we can do radio stuff.

Deby: Why do you think we don’t get so many women on quiz shows?

Lisa: I think there are several reasons. You go into your average pub quiz, and there are loads of women, you know, it’s split. But, I think once you get into that kind of tele quizzing arena, it all gets a bit sort of confrontational and gladiatorial. I think women’s instinct is to shy away from that and men’s instinct is to embrace it. I don’t know why that is. And obviously, it’s not quite as clear cut as that or we’d never get any women on quiz shows. There is also, I think, that certain fear of feeling like you’ve made an idiot of yourself, which, again, possibly affects women more than men or women just think about the possible outcomes more than men. A third strand of that, which is obviously a more recent phenomenon is social media. Your average contestant on a well watched quiz show will get startling amounts of comments that they didn’t ask for.
(See the above video for more on this.)

Deby: Obviously a contestant might win some money but, what other rewards are there from going on a TV quiz show?

Lisa: It’s like doing anything that scares you, that rush of adrenaline. I think you really do get a bit of a sense of achievement from it. And if you’re at all interested in the way that TV works behind the scenes, then it is a great insight into the mechanics of how it all comes together because you’re there from the beginning all the way through to the end. You get to spend real time in the studio watching the cameramen, lighting people, sound guys, makeup people, question people and the researchers all doing their thing. The Eggheads can chat to the contestants, but The Chasers can’t, because that’s part of the mystique of the show, you don’t know who you’re facing until you’re standing on the line as a contestant, and they play the music, and The Chaser walks out. But that’s a deliberate decision on their part, you understand that. Some hosts will talk to you, some hosts won’t talk to you. I still go down sometimes before shows start or between shows, I absolutely love it.

picking your team, don't always go for the cleverest people you know, go for the people that when you don't know the answer, have the best chance of working it out

If you’d like to find some top tips for contestants before going on a quiz show Channel 5 have produced a masterclass.

Find out more about the Eggheads and how to apply to become a contestant.